On & On Spirulina Gold Capsules 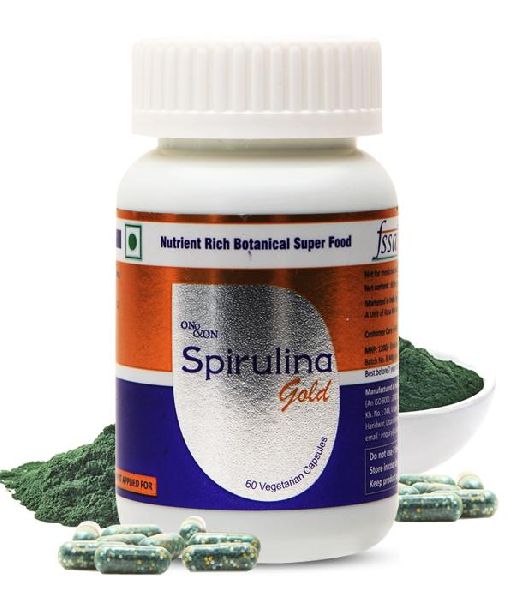 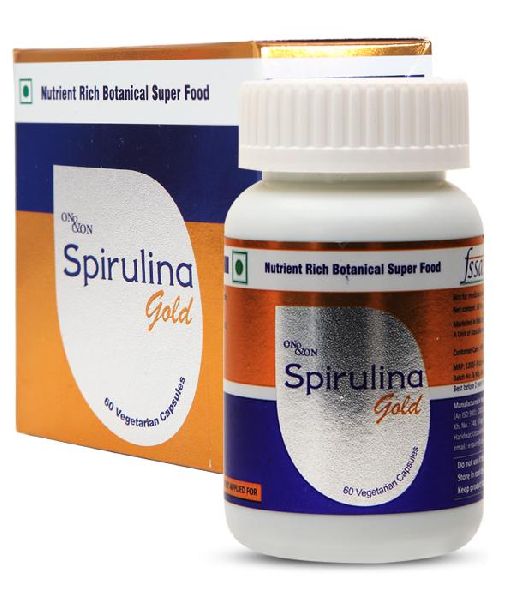 Get Best Quote
On & On Spirulina Gold Capsules

Spirulina : Miracle High Protein Super food According to a study done by the Department of Aquataculture in Taiwan, spirulina shows significant immune-boosting properties.

Description
On & On Spirulina is Pure Veg
On & On Spirulina capsules are Pure Veg Capsules (and NOT Gelatin Capsules). Most of us remain uninformed about the nature of ingredients that makes up the capsule. Many of us knowingly or unknowingly consume non-veg shiny shells derived from cows, pigs and other animals. On & On Spirulina is not only rich in its nutrient profile, but is also made with Pure VegCapsules and is absolutely safe for consumption.

What is Spirulina.?
In today"s fast forward life, when often the major nutrients are lacking Spirulina is the simple solution for well being. Scientifically, Spirulina is simple one-celled microscopic blue-green algae with the scientific name Arthrospira platensis. Under a microscope, spirulina appears as long, thin, blue-green spiral threads.
Spirulina is a bliss to human being for various reasons and is found in many freshwater environments, including ponds, lakes, and rivers. It thrives best under pesticide-free conditions with plenty of sunlight and moderate temperature levels. It is all natural way for overall wellbeing.

Candida
Candida If you have an autoimmune disease such as Crohn's disease, chronic fatigue syndrome, Lupus or fibromyalgia, chronic Candida yeast can both cause and worsen your symptoms. Spirulina has been shown to encourage and support the growth of healthy bacterial flora in your gut, which can help keep Candida overgrowth under control.

HIV and AIDS
Drugs such as AZT used to treat HIV and AIDS patients can actually cause the symptoms they are supposed to cure. However, spirulina has been shown to help inactivate the human immunodeficiency virus associated with HIV and AIDS.

Nothing to Sneeze At

Protein Supplement
Amino acids make up 62% of spirulina. Because it is a rich source of protein and other nutrients, spirulina has been used as a nutritional supplement. However, although spirulina contains a certain level of protein, you would need to take very large quantities to see any effect. Other sources of protein, such as nuts, legumes, whole grains, and meat, provide protein in smaller servings.

Oral Cancer
In one placebo-controlled study, taking spirulina seemed to reduce a precancerous lesion known as leukoplasia in people who chewed tobacco. Lesions were more likely to go away in the spirulina group than in the placebo group.

Liver Disorders
Preliminary evidence suggests that spirulina may help protect against liver damage and cirrhosis (liver failure) in people with chronic hepatitis. Spirulina; is the richest source of Omega Fatty Acids, Protein, vital minerals and Vitamin B Complex Benefits are.

DHA is used as a supplement for premature babies and as an ingredient in baby formula during the first four months of life to promote better mental development. This practice probably started because DHA is found naturally in breast milk. DHA is used for treating type 2 diabetes, coronary artery disease (CAD), dementia, and attention deficit-hyperactivity disorder (ADHD).

Some people use DHA is for improving vision, preventing an eye disease called age-related macular degeneration (AMD), preventing and treating depression, and reducing aggressive behavior in people in stressful situations.

How does it work?
DHA plays a key role in the development of eye and nerve tissues. DHA may also reduce the risk of heart and circulatory disease by decreasing the thickness of the blood and lowering blood levels of triglycerides.

Citrus Bioflavonoids
Bioflavonoid is a generic term used to describe biologically active members of the group of plant-derived compounds known as flavonoids. Bioflavonoids were first discovered in 1936 by Nobel-prize winning scientist and vitamin C research pioneer Albert Szent-Gyorgi, who originally named the group of compounds "vitamin P." Since then, over 4,000 flavonoids have been identified and classified according to chemical structure. Bioflavonoid supplements are available as individual flavonoids, such as quercetin (derived from onions), and as multiple bioflavonoid complexes (derived from citrus fruits), which are often combined with vitamin C. Compounds commonly featured in citrus bioflavonoid supplements include hesperidin, rutin, naringin, and quercetin.

Primary Uses
Most of the health benefits attributed to citrus bioflavonoids relate to their antioxidant activity, which has been demonstrated in numerous in vitro and animal studies. Citrus bioflavonoids are derived from fruits high in vitamin C, and they appear to act synergistically with the vitamin to neutralize free radicals. Bioflavonoids' antioxidant properties are thought to be particularly beneficial for capillary strength.

Benefits and uses of citrus bioflavonoids

Looking for "On & On Spirulina Gold Capsules" ?